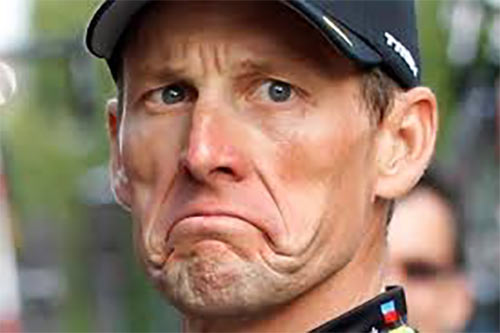 4:30 p.m. Cheated while playing a game of solitaire. Then lied to Julie about it. And then threatened to throw her off the solitaire team if she told anybody.
5:00 p.m. Posted all my Lance Armstrong paraphernalia on E-bay
5:32 p.m. Ended up bidding on tickets to the Inaugural Ball.
5:52 p.m. Learned that Lance “allegedly” took a drug with the street name: Edgar Allen Poe
5:55 p.m. Wondered what drug might have the street name Dr. Suess.
5: 58 p.m. Developed a list of interview questions approved by the Imagineering Company’s department of corrections:
1.   What do you think a good sentence for cheating is?
2.   Have you ever bullied a semi colon?
3.   Do you think you should capitalize crime in a sentence?
6: 00 p.m. Wondered if Lance will plagiarize his autobiography.
6:15 p.m. Tried turning Lance’s last name into a verb. Check this out: “If you can’t strong arm your friends to do drugs Armstrong them.” Yes, I think it works nicely.
6:28 p.m. Wondered if Lance will pursue a career in politics…seems like a natural.
6:30 p.m. Considered creating a new foundation called LieStrong—A non-profit for people who lie, cheat and steal for profit.
6: 45 p.m. I’m sorry I need to interrupt this entry to make my own admission. I doped myself before writing this blog. Which is why I am sprinting to the end of this sentence.
6:58 p.m. Need to confess that I didn’t do it alone…the letter e was also doping. It will be banned from the alphabet and have its title as vowel removed.
7:00 p.m. Oh wll,, I won anyway…and that’s all that mattrs.